Here’s a beautiful and poignant article written in 2018 by Dr. Patrick O’Beirne, Ballinrobe Dental, about how Candle of Grace came about…

A Bit of History

A piercing, shrill alarm rings out as white coat-clad scientists rush to a desk of dials. High levels of radioactivity have been detected, the Swedish scientists are ashen-faced and silent as they check and re-check their equipment. They quickly conclude that their nuclear power station is functioning as normal. The source of the radiation soon becomes apparent. It is being carried by the wind from a little-known town in Ukraine called Chernobyl. Primitive satellite pictures show a fire at the nuclear power plant in Chernobyl, with the Cold War at its height, information from the Soviet Union is a trickle at best. The scientists in Sweden realize that this is a massive nuclear disaster. They are located 1000 km from Chernobyl, a distance equivalent of Castlebar to Paris, and they have detected significant increases in deadly radiation. There was no way the Soviet Union could hide this nuclear catastrophe.

The Chernobyl disaster happened on the 26th of April 1986. However, the government of the Soviet Union did not inform the citizens of Ukraine and Belarus for another week that their land was polluted by the lethal radioactive material. The main news channel in Moscow first reported the event as an aside, a small mention at the end of the news bulletin. It took eighteen days before the leader of the Soviet Union Mikhail Gorbachev makes a television announcement about the disaster, and even then the significance of the situation was down-played.

Meanwhile, in the Gomel region of Belarus, about 50 km from Chernobyl, deadly black rain was falling on children’s heads, the radioactive sun was shining on them as life carried on as normal.

Why is radioactivity so harmful?

Very simply, radioactivity is energy that is released from atoms, the building blocks of life. This energy when carefully controlled is very useful, for example, x-rays, microwaves, the generation of electricity. When unleashed and out of control radioactivity is extremely deadly. It can kill instantly or pollute the environment and kill slowly. It affects every part of the body, causing extreme birth defects, every imaginable cancer, the immune system, your ability to fight infections and unimaginable physical and mental health issues.

Radioactive material cannot be “cleaned-up”. Once an area of land becomes polluted, it remains polluted for 20,000 years. Humans must be evacuated, the land must be left idle. 70% of radioactive fallout from Chernobyl landed on the nearby country of Belarus. Today, 32 years later the country has several “exclusion zones” where entire towns and villages have had to be abandoned. In reality, the entire country is heavily polluted with deadly radiation.

Why bring children from Belarus to Ireland?

Scientists have proven that one month spent in a clean zone such as Ireland removes 30% of the radioactive material from a child’s body and the levels stay lower for about a year. This improves their health, their quality of life and will help increase their lifespan. A holiday in Ireland gives the child hope for a better future and introduces them to many experiences they could only dream of: swimming in the ocean, climbing a mountain, trips to the fun-fare or the cinema, and being treated to new clothes to mention but a few. The child returns home full of enthusiasm and invigorated to meet the challenges of living in such a dangerous environment. Memories of the trip to Ireland stay with them for life, when they are met with difficult times at home in Belarus, memories of the clean fresh air of Achill Island or catching their breath as they bravely dive into the cold crystal clear water of Clew Bay can only serve to spur them on.

From Chernobyl to Castlebar

Lily Luzan is a very busy Mayo woman, originally from Belarus. She is one of the founders of the charity “Candle of Grace” and brings Chernobyl children to Ireland every summer. Lily is motivated by her own experiences, she feels blessed to be living in the fresh, pure west of Ireland. From her heart Lily feels for the victims of Chernobyl, she is determined to help the children and determined to ensure that 32 years later the tragic situation in Belarus is not forgotten.

Lily was a child, living 60 km north of Chernobyl in 1986. Lily recalls: “Being a five-year-old child I got so frightened seeing my mother weeping and crying that I thought the war had started and we were going to be killed. Now I understand the meaning of my mum’s words: “The war with an invisible enemy”. Chernobyl is our enemy that we do not know how to fight and what to expect from it.” They were forced to hastily abandon their home and her Mom brought her family of three young daughters (aged 10 years, 5 years and 7 months) to Moscow to live for three months. Although safe from the deadly radiation in Moscow, they were far from welcome. The word “Chernobyl” was like a plague. Lily recalls “People were afraid to touch us, to stay close to us, some were shouting nasty words at us. My mum kept crying day and night. When we realized the whole impact of the disaster and the fact that the aftermath of Chernobyl is to stay with us for another 20,000 years or so, we decided to go back home and continue with our lives there.”

Anna has a similar tale to tell

Anna was working as a translator in Mayo when she first met Lily. Moving to Ireland Lily had many documents to decipher and Anna was there to help. Lily recalls “I only had a short meeting with her, but the thought flashed before me “This lady will be a good friend of mine”. Sometime later destiny was to intervene when by chance they met each other again. Their first project together was to help a child named Maxim who with a deadly brain tumour needed surgery in Germany. Anna, Lily together with the immigrant community in Mayo fundraised for Maxim’s surgery. Despite their best efforts Maxim passed away, but this sad event was to plant the seed and motivated Anna and Lily to establish the charity “Candle of Grace”. 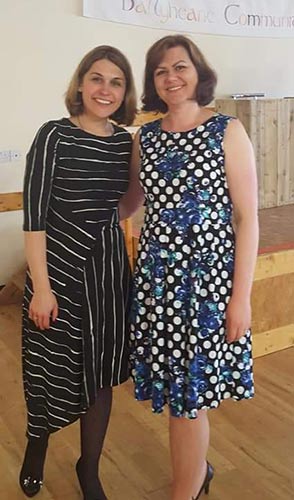 In early 2016 Anna, Lily and a group of enthusiastic volunteers established Candle of Grace. They achieved official charitable status in March 2017, the charity is run entirely by volunteers. They focus on bringing children from the Chernobyl area to Mayo; children from the single parent, low-income families or families with three or more children.

In 2018 seventeen children came to Mayo for a three-week break. Fundraising for these three weeks is a year-long process, fundraising for the 2019 event is already underway. Flights, bus transfers, insurance – those are the biggest costs. Finding host families is a challenge. They are always on a lookout so if you are thinking of hosting a Chernobyl child, please get in touch. They do not bring disabled children to Mayo, as they do not yet have adequate skills and resources. The children they bring may appear healthy but there is a lot going on in their bodies and issues will manifest in their adult life.

One of the main sources of income for Candle of Grace is a Culture Club based in Castlebar where immigrants and their children from countries of the former U.S.S.R. meet to speak their native language, where the children learn about the traditions and customs of their ancestral home. Members of the Russian-Irish adoption group also attend these gatherings, and Russian children adopted by Irish families are immersed in the language and beautiful traditions of their birthplace.

The children from the 2018 trip have just returned home. They have renewed energy and memories of a glorious summer in Mayo. Anna and Lily comment:

“We would like to sincerely thank all the host families from all over Mayo that came on board this year and that have been working with us in the past. Your help is priceless, you’ve opened your homes and hearts to these children, they will never forget your kindness and generosity, their parents are so incredibly grateful to you for this rare opportunity for their child to have a rehabilitation rest and improve their health. We wouldn’t be able to do it without you. Thank you!”

We really appreciate all the help we get from local businesses and volunteers. No matter how small your gesture is, for example, giving us a hand with transport (always a challenge!) or buying the kids ice-creams is very helpful and valued.

One of the “big days” of the 2018 visit was a trip to Ballinrobe. All the children received complimentary dental care at Ballinrobe Dental and complimentary eyecare at Ciara McHugh Optometry, Ballinrobe. We would like to thank Dr. Patrick O’Beirne, Mrs. Ciara Mc Hugh-O’Beirne and their teams for their kindness and generosity, having closed their practices for a full day in order to treat the Chernobyl children completely free of charge.

Devour Cafe in Ballinrobe hosted a party for the children during the day. A massive array of cakes, buns, and treats were provided, the children couldn’t believe their eyes! Yvonne Murphy provided the entire event free of charge, a very generous and heart-warming gesture.

Bridge Signs Ballinrobe provided signage for the day. The children were amazed to see their native language on signs thousands of miles from home! Thanks to Mr. Brian O’ Reilly and team.

Cregal Art Galway provided art supplies for the children, given to the children as gifts at the end of the day. Some beautiful works of art were then produced!

Dental and Optical care is something that most of the children would never have had the opportunity to receive at home in Belarus. All seventeen children required extensive dental treatment and six had significant optical issues diagnosed and resolved. They all returned home smiling, with perfect eyesight and fancy new glasses!

The Irish people are no strangers to suffering, we can empathize with others suffering, and as a result, we are one of the most charitable countries in the world.

Candle of Grace is a local charity, the fruits of your donation can be seen every summer. Anxious, poorly clothed, thin and tired children arrive in Dublin airport afraid to make eye contact. Three weeks later these same children wave goodbye, with bright eyes, wide smiles, well nourished, refreshed and invigorated, sad to leave Mayo but enthusiastic to share their amazing experiences with their families and friends back home.

Donations are always welcome, no matter how small. For ways to donate, please click below.